Home » Flags Across the Harvest #6

Flags Across the Harvest #6

A basic principle of physics states that it takes more energy to move a body at rest than one that is already in motion. Thus, the dynamics of motion can be attached to most if not all aspects of life.

A dynamic personality is one that is constantly moving and improving. The theory of capitalism, the economic system our great nation was founded on and some are trying to remove, is rooted in moving forward.

Talk to any Wall Street analyst and they will speak of growth potential, not flat or stagnant earnings.

In like manner the body of any living creature needs to move and be active for a healthy and fulfilling life. Motion or the lack of it can either be a friend or foe. Couch potatoes beware.

The American farm or ranch is all about motion… rapid motion that is. As the Book of Ecclesiastes tells us, “For everything there is a season…”  No where in life is this played out in more vivid detail than in agriculture.

Even the descriptive term used to define the stages of life define motion; one grows old. Thus, our Lord designed His creation to keep in motion and not be stagnant. Both our body and mind need to keep growing.

Since I am the Hot Rod Farmer a good deal of my passion in life is centered around engines and the vehicles that harbor them. There is no denying I am the quintessential “car guy.” What better place to showcase an engine than in a car?

Yet with all of these fundamentals no internal combustion engine tugs at my heartstrings more than a stationary one. I am sure many of you share the same romance.

To those not familiar with the term, a stationary engine is one that is used to perform work and is not attached to a moving vehicle. A good example is an engine that powers a generator, compressor or an irrigation pump.

I have expanded that definition to any placement of an engine that allows one total access while under load. If I can gain access or stand next to an engine while it is performing work and not just idling, then in my mind it is stationary, even though it is out of the realm of the proper qualification.

What appeals to me about a stationary engine is the ability to see and hear what is going on with it. You can almost feel the power pulses as they travel to the crankshaft, you can tell if it is happy under the load and all aspects of its existence becomes very visceral. You are right there with it and the two of you become as one —- man and machine deeply involved in a loving and intimate relationship.

The hood and fenders of a car along with the fact that it is moving does not allow for this to happen. But a car on a chassis dyno will allow you to be there, leaning over the fender as the engine crescendos to peak horsepower with the valve train and other parts singing sweetly into your ears. Those that share my passion know exactly what I am speaking about… only they will understand.

When I was in my early teen years a friend of the family arranged for my best engine experience. He worked as a tugboat dispatcher for McAllister Towing in New York City.

He made it possible for my dad and me to spend a day on a sea-going tug that was in the harbor while between long distance tows. I will never forget her name, the Helen McAllister. 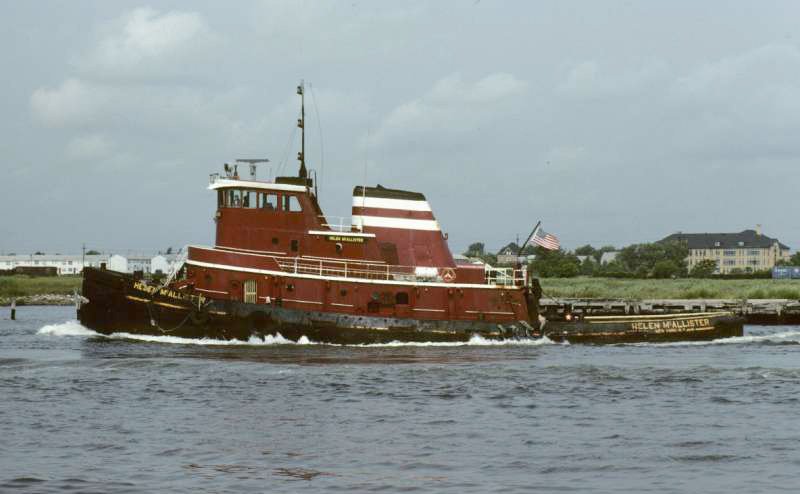 She was built in 1966 and the Helen was far from new; she had many journeys under her hull but none the less she was beautiful in my eyes.

The highlight of the day was when the engineer brought us down into the engine room and there sat a sight to behold: an EMD (GM locomotive engine altered for marine use) two-stroke diesel.

If my memory is not failing me, she idled around 120 rpm and since we were traveling to move a Hess Oil Company tanker, she probably was only running a few hundred rpm more than that.

I believe the EMD redlined at around 1,200 rpm, give or take a few revolutions of the crankshaft.

To this young farm boy being right next to that EMD as she turned chemical into mechanical energy was better than being in the locker room of the Dallas Cowboy Cheerleaders. Well maybe that is a stretch… but you can imagine my excitement!

That day allowed me to recognize the love for stationary engines that was hiding deep in my soul that I did not know I had.

We were somewhere in Nebraska well before dawn and stopped along the side of the highway. In the beautiful silence that is known only to remote rural areas, we heard a distant but muted sound. A diesel working an irrigation pump.

I told Glenn I needed to find that engine. To me it was a siren’s song akin to a mermaid calling a lonely sailor to his demise on the rocks of the shore.

Glenn thought I was nuts, but we were young, so he just went along with it. Several miles later down a dirt road there she was; a spanking new 8V-92 Detroit Diesel with the turbocharger all spooled up pumping nature’s bounty from the Ogallala Aquifer onto the fertile soil of a Nebraska cornfield.

In the vast darkness only the glowing red turbocharger and the lights on the gauges of the control console gave any indication that the diesel was there, beyond its groan against the constant load.

I considered it a dutiful solider at a remote outpost, reverent to the cause and needing no supervision. If I could I would have sat down on the ground next to her and spent the rest of the night.

To many this editorial may be about stationary engines but it is not. It is meant to have you seek your passions and embrace them. Only then can the dynamics of a fruitful and rewarding life be realized.

Gentlemen start your engines and get in motion!