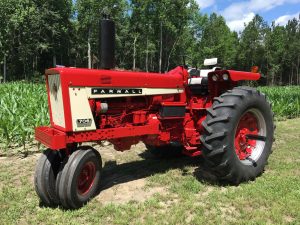 The first one is the 706 Farmall I started farming with 40+ years ago. I just discovered it back in IL and bought it back last year and restored it. It’s a 1967 German Diesel. It brings back so many great memories when I drive it. 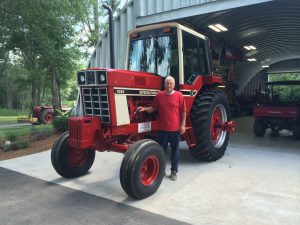 The second is the 1086 my Dad, Gene Miller, bought new in 1979. I found it the day he died in 2007 and had it restored in IL. Its in immaculate shape and has been featured many times in magazines.

These tractors hold tremendous sentimental value and I would never sell them.

Rodney Miller & Jann Carl’s show, Small Town Big Deal originally aired on cable station RFD-TV, where it grew into one of that station’s most popularly rated programs. With its broadcast syndication in markets from New York and Atlanta to Philadelphia and Dallas, the show now reaches over three-fourths of the nation. It airs in the majority of U.S. major TV markets and on over 160 local stations. Now merged with www.CountryRoadTV.com watch more than 700 hours of amazing country music shows, Americana lifestyle shows, gospel and more!

CategoryWhat's in your Machinery Shed?