Home » Missing in action…where did the coolant go?

Missing in action…where did the coolant go?

A common occurrence is to check the coolant level on a hard working gas or diesel engine and to find that it is low while there appears to be no leak. You top it off and carry on but with an uneasy feeling — is a serious engine problem looming? The coolant had to go somewhere. The answer in most instances is probably not. The cooling system is working the way it should.

If you work an engine hard it uses more fuel but what we do not think about is the Btu of heat that is created by the fuel consumption. The thermal load on an engine is directly linked to the rate of fuel burned. The heat needs to be absorbed by the coolant to prevent thermal distress. 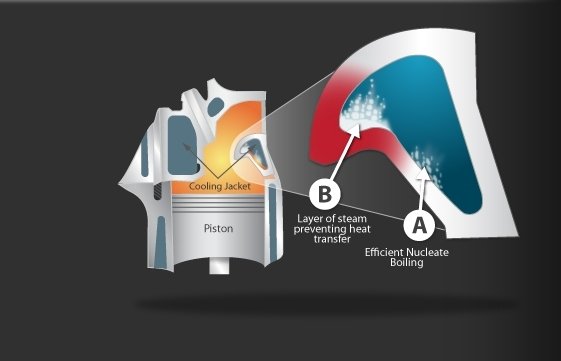 Under high thermal load the coolant in the water jacket of the cylinder head undergoes a regiment identified as nucleate boil. It is represented by the illustration above. When nucleate boiling occurs the most effective heat transfer to the liquid happens. When the engine is lightly loaded the surface temperature of the combustion chamber is usually low enough that boiling (in the water jacket) does not take place.

After the coolant boils it is pushed from the site via the system pressure and water pump. It takes heat with it and will re-condense as it cools.

Water-based anti-freeze (50/50) has a low boiling point and a high surface tension. It is stubborn to release from the nucleate site. This produces an elevated metal surface temperature in the cylinder head and consumes the additive package along with the water that turned to steam. That is why an SCA is required with traditional coolants.

There is hardly any heat transfer to water-based coolant once it becomes steam. The coolant becomes consumed over time when the engine is worked hard —- the water and some of the additives become depleted.

The elevated temperature of the cylinder head has the potential to lead to cracking and if a pressed-in valve seat is employed, it may come loose and fall into the cylinder.

Mystery of the missing coolant solved!

The difference between octane and cetane

Hot Rod Farmer: I want you to make a FULL PULL…. from planting to harvest!!!