Home » Flags Across the Harvest #15

Flags Across the Harvest #15

I have to admit I am not much for television. There are more productive things I would rather be doing instead of sitting in front of the “boob tube”.

This is not to mean that over the years there were not shows that I watched weekly and enjoyed. A sampling of these from past and relatively present are Baa- Baa Black Sheep, The Unit, JAG, The X-Files and 24.

A good military, UFO or action series will usually have me captive for the one hour.

Today, even with all the channels now available I find myself realizing that there is nothing to watch. It is akin to standing in front of a refrigerator full of food but seeing nothing that catches your fancy to satisfy your craving.

To this cause, a few years back my wife Charlotte gave me a birthday present of Seasons 1 and 2 of The Dukes of Hazard — the quintessential red-blooded American car guy TV series. I did not watch them up until recently though. 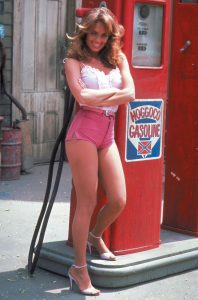 Now I have to admit in 1979 when Dukes premiered on TV I enjoyed it but I was more enthralled with Daisy Duke and her gams then the escapades of the General Lee. Being honest I do not believe that has changed much in the past forty years.

But I must admit that I have a new-found respect for that series. I really enjoyed all the shows in the first two seasons.

Being a country boy, I long for the old days when the roads were empty as is in the show. The Duke Boys were a little too aggressive in their driving style but give me a nice dirt road and some good old American horsepower under the hood and I would be known to make more than a little dust myself.

And the ruralness of the filming location (first in Georgia and then in California) will forever pull at my heartstrings.

Many could critique the acting and script as being at best simplistic — but it resonated with me now that I am older more than it ever did before. It begs for you to ask why do things need to be so complicated today?

Yet it mimicked reality with Boss Hogg’s greed, Sheriff Roscoe’s change of persona from losing his pension and the Duke Family’s rock-solid core values even though they were retired (thanks to the U.S. Government) moonshiners.

In the South the best hot rodders were usually moonshiners or those that built their cars and engines.  Just look into early NASCAR history.

I found interesting that there were so many Mopars on the show along with more than a few AMC products.

Many of the jump scenes involving the local constabulary began using a Chrysler product but the actual jump was accomplished with an AMC Matador sedan. Usually of 1974 vintage with its huge crash bumpers.

One episode featured the “bad guys” that the Dukes were tangling with driving a 1971 AMC Matador four-door with stamped steel wheels and hubcaps. In the scene the AMC takes off down a two-lane paved road and low and behold, you have to listen for it, but I’ll be damned, it chirped the tires pretty good on the 1-2 shift. I could not believe my ears, so I rewound and played it over again a few times to confirm what my ears heard above the shucking and jiving of Bo and Luke.

I tried like anything to see if the Matador had dual exhaust, that would make it a 401 car, but I could not tell. Based on the way it ripped the tires on that first shift I believe it was and tuned to perfection to boot.

Having never worked in the movies I was very impressed and it took a great deal of talent to have the police cruisers literally shed their body parts on queue. We may take that for granted as we sit in an armchair and laugh at it being ridiculous but it was not easy to make happen. There was a lot more talent on that set than first meets the eye in both mechanical and driving prowess.

What struck a chord with me was how in 1979 all the cars that were wrecked were considered consumables and so commonplace they could readily be destroyed.

Though most were not legitimate muscle cars but who would not want a nice two-door 1971 Plymouth Satellite that Daisy had in a few episodes before moving up to a 1974-version, then later to a new at the time, Jeep CJ. Uncle Jesse’s 1970s Ford F-100 short-bed, the Matador that ripped the tires or even Boss Hogg’s Caddy, albeit sans the steer horns on the hood.

How times have changed — those cars would be way too precious today to destroy as they were.

But what I enjoy most is the purity of the underlying theme. No one got hurt or killed, there was no sex or suggestion of it, and as Waylon Jennings sings in the theme, the Duke Boys were just a modern day Robin Hood — misunderstood and incorruptible backwoods car guys.

Many of you may disagree but I think the world would be a better place today if we had a good deal more people like Bo and Luke. A few more Daisy Dukes wouldn’t hurt also!

The truth about biodiesel.