Home » Flags Across the Harvest #10

Flags Across the Harvest #10

The year was 1976 and all was well in my world. My beloved America was preparing to celebrate her 200th birthday, the war in Vietnam was over, gasoline was no longer in short supply, and no one yet knew of the malaise that an unknown Jimmy Carter would bring to this nation in a few short years.

It was a cold winter and hot summer in Warren County, New Jersey, the way it should be, and our crops were standing tall.

The road we lived on was still dirt and I was not quite yet old enough to legally drive, but that did not stop me, or my dad from throwing me the keys to our 1964 Ford truck (that is poetic license, they were always in the ignition). If a boy could ever celebrate youth, I did in 1976.

The man was selling it because he was getting married and his soon–to-be bride presented him with an ultimatum: it was her or the Honda. Thankfully for me she won!

The Honda was only four years old at that time, new by my standards.

I must admit I was torn by that bike and it caused me much angst. In one way I was so proud. It was my first motor vehicle and purchased it with money I earned through hard work on our farm.

Then I would see that cast-in and in clear view: Made in Japan on the engine case and my emotions would sink. I am an American and I wanted a Harley or even a Cushman but not an import of any kind! Thus, I hardly used it and it was eventually replaced by a 1968 Dodge Dart 270.

Due to my paradox I never really bonded with the Honda and did not enjoy riding it but I did end up keeping the bike until 2002. I would probably still have it if I did not need to get it out of my garage. A man in town bought it for $500.00 for his daughter.

He is a bike guy that favors old Harleys but the CB-350 was and still is a good beginners’ bike.

To the best of my knowledge the Honda’s fate remained about the same as it did since it hit the shores of America — he never did anything with it. His daughter got married and the bike sits.  It is funny how some vehicles or farm machines are destined by fate to never be used no matter how many times they change hands.

To those of us that embrace machinery of all kinds we know that though it cannot be proven, some do have a soul.

Not a soul in the sense of a person or animal but there is something more going on than meets the eye. 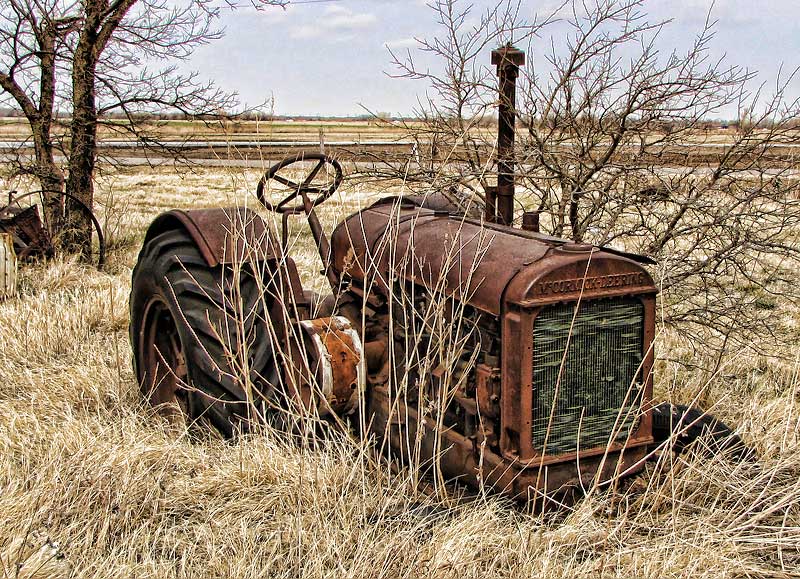 Just as with living things, a machine or in the case of my Honda, seem to be predestined to an existence that no matter how hard they try they cannot breakaway from; a curse or blessing that is their destiny.

They can be used and loved from day one or take up life with a disconnected and uncaring owner.

A good friend of mine recently purchased a 1937 Willys four-door sedan that is all original and still has Nebraska license plates from the early 1970s on it. He is only the third owner and it appears that the car had very little use in its lifetime.

The man he purchased it from was going to make it into a hot rod. He decided that he was too old to start a project of that magnitude, so he sold the car.

This car now once again finds itself being unused and its fate dangling in the balance… I cannot help but wonder how many times it was in the same situation during its 82 years?

It is hard for me to believe that what was an undesirable body style to most, somehow avoided the grim reaper of the crusher or the hot rodder’s cutting torch for so long.

How many close calls did the Willys have? Has it been preordained for it to survive or did its luck finally run out when it hit New Jersey soil?

I have not seen the little sedan yet but I have made known my thoughts about how it deserves to not be hot rodded or restored. It is my belief that it needs to be made into a survivor and driven as it was intended to be.

Just image how happy the little car would be if someone finally used it instead of it being tucked away like a time capsule with no human interaction, living a life of solitary confinement. As I write this its fate is still undecided.

It is now time for my dilemma.

A few years back I read an article about Polaris Industries in The Wall Street Journal. It stated that their Indian motorcycle brand was coming out with a new but retro inspired bike, the Scout.

I found out that it was “old school” in appearance but has a modern four-valve OHC engine and is liquid cooled. It too is considered a beginner’s bike much like my CB-350 was.

I went to Indian’s website to look… for no reason. I have had no desire for a bike since 1976, but when the screen loaded, I was blown away.

I was not looking for a bike at all when I purchased the Honda, and neither am I today. But the Scout grabbed me and grabbed me hard.

Then my conscience kicked in and told me NO! NO! NO! The Scout deserves better than you. You will NOT ride it. You do NOT have the time. You are NOT a kid anymore. Do NOT make the same mistake again.

I am fighting a mental tug-of-war that is the same but different from 1976.

It has been 43 years. Do good things come to those that wait? Or is the Scout just a pathway to another 1968 Dodge Dart?

Hot Rod Farmer: Let’s keep being STRANGERS… that is to the inside of your engine!

Hot Rod Farmer: A compelling case NOT to invest in an EV.